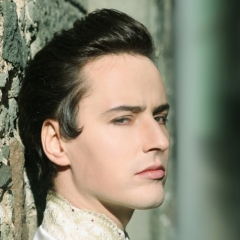 Vitaliy Vladasovich Grachyov (Виталий Владасович Грачев) born 19 February 1981, Daugavpils, Latvian SSR. Vitas is a Russian pop singer, composer, actor, and fashion designer. He is most commonly known by his shortened first name, Vitas, or Витас in Russian. Much of his music is straightforward pop influenced by techno, and occasionally classical opera.

He has received much of his fame through Russian television and is planning to sign to entertainment labels in countries such as China, Korea, and Japan in order to expand to those markets. Vitas' 2000 video "Opera #2" has been forwarded frequently via the Internet, which accounts for much of his worldwide recognition.